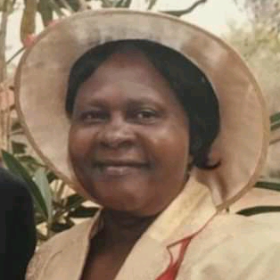 In loving memory of...

"Let the memory of CHRISTABEL OBUHATSA be with us forever "

It is with profound sadness and humble acceptance that we announce the death of Mama Christabel Janet Obuhatsa, formerly of Kings Kids Village (KKV) which occurred on 11th October 2021 at MP Shah Hospital.

Aunt, Grandmother, and Great Grandmother to many. Mama Christabel was also a friend to many.

The cortege shall leave KU Referral Memorial Home on 21st Oct 2021 for burial. The Burial ceremony will be held at Emutete Location, Esianda Village in Vihiga County on 23rd October 2021


Date of Death must be greater that Date of birth

No image has been uploaded for this memorial.

No video has been uploaded for this memorial.

No audio has been uploaded for this memorial.

I know I was born of love, and love was my mother.

I know I wouldn't be where I am today if not for your love, the purest form of love.

I don't know anyone else that's looked into my eyes and understood my joys and pains.

I can't remember a day you gave us less than 100%, whether as a mother, a wife, an Aunty or Grandmother.

You always put others before you.

It will never be the same doing life without you.

But this bond, this love, is forever

You have earned your rest, rest in power

Click on the image and drag around to adjust it.

Success! Your message has been sent for review.
Error! Already Submitted .

You have successfully signup for notification.